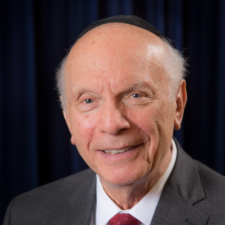 Rabbi Arthur Schneier is internationally known for his leadership on behalf of religious freedom, human rights and tolerance, whose activities have spanned the globe for more than five decades. He has played a major role in addressing issues in the former Soviet Union and Russia, China, Central Europe, Latin America and the Balkans.

As founder and President of the Appeal of Conscience Foundation (1965) and a spiritual leader of New York’s Park East Synagogue (1962), he was awarded the Presidential Citizens Medal for “his service as an international envoy for four administrations” and “as a Holocaust survivor, devoting a lifetime to overcoming forces of hatred and intolerance.”

Recipient of U.S. Department of State Special Recognition Award for “…his ecumenical work in favor of mutual understanding, tolerance and peace….”
Since 1962, Rabbi Arthur Schneier has been the Senior Rabbi of Park East Synagogue, one of New York City’s historic landmark houses of worship and home to one of the leading modern Orthodox congregations in the U.S. and founder of the Rabbi Arthur Schneier Day School. He has received many world leaders at Park East, including two Secretaries General of the U.N. In 2008, he was host to Pope Benedict XVI, the first ever Papal visit to a synagogue in the U.S. and in 2009 welcomed the Ecumenical Patriarch Bartholomew I.

Among the countries that have honored Rabbi Schneier for his work are France, Germany, Russia, Austria, Croatia, Italy, Hungary, Poland, and Spain. He is the recipient of the U.S. Presidential Citizens Medal and the U.S. Department of State Special Recognition Award, nominated for the Congressional Gold Medal (2013); named as one of the 100 most trustworthy people in the U.S. by the Readers’ Digest magazine poll (2013) and listed as one the most influential rabbis in the U.S. by the Newsweek Magazine (2010-2013).As head of the interfaith Appeal of Conscience Foundation, he has been a consistent and effective voice for peaceful coexistence, inter-ethnic and inter-religious cooperation. He served as U.S. Alternate Representative to the United Nations, member of the UN Alliance of Civilizations High Level Group appointed by UN Secretary-General Kofi Annan and Ambassador of the Alliance appointed by UN Secretary-General Ban Ki-moon.

From his early activism to ease the plight of the Soviet Jewry and the persecution of religious groups throughout the 1970s and 80s to his efforts to stop the bloodshed in Yugoslavia through the early 1990s, from leading the first Interfaith mission to China in 1981, in 1998 President Clinton appointed him as one of three religious leaders to open on religious freedom with President Jiang Zemin; to his role in monitoring multiple elections during the democratic reforms in Russia and Eastern Europe in the late 1990s, he has demonstrated a deep commitment to direct engagement and action in pursuit of peace and freedom around the world. Since 1999 Rabbi Schneier has convened and presided over half a dozen international conferences – in Austria, Switzerland, Macedonia and Turkey – to foster tolerance, understanding, and advance dialogue and resolution of ethnic and religious conflicts. 1970 Rabbi Arthur Schneier lead Appeal of Conscience Foundation’s first interfaith fact finding mission to Northern Ireland; 1981, lead interfaith Human Rights to Argentina during the dirty war; 1988, first interfaith mission to Cuba. Private audiences with Pope Paul VI., Pope John Paul II. and Pope Benedict XVI.

Rabbi Arthur Schneier is an especially sought-after speaker and participant at inter-religious summits sponsored by the Vatican, Patriarchate of Moscow and the King of Saudi Arabia; he addressed European Parliament, UN and UNESCO, Academy of Social Sciences, Beijing, World Economic Forum, Davos and Leaders of Change Summit, Istanbul.

He is the recipient of eleven honorary doctorates from U.S. and European universities. In recognition of his achievements his alma mater, Yeshiva University, established the Rabbi Arthur Schneier Center for International Affairs in 2004.

Born in Vienna in 1930, Rabbi Schneier survived the Holocaust in Budapest, Hungary and arrived in the United States in 1947. He is married to Elisabeth Nordmann Schneier.