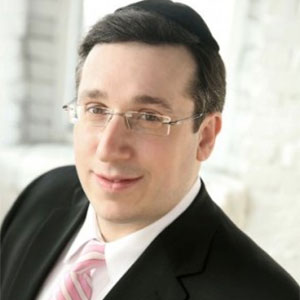 Cantor Benny Rogosnitzky was born in Liverpool, England, but spent his early schooling in the Netherlands and Johannesburg. At the age of nine, his liturgical talents were discovered by world-renowned cantor Johnny Gluck, and he subsequently joined his choir as a child soloist. At age sixteen, he returned to England where he was invited to lead High Holiday Services at prestigious Brighton and Hove Synagogue. At the same time, he furthered his Jewish Studies in the Manchester Yeshiva. Cantor Rogosnitzky pursued his higher education at the Royal Manchester School of Music and Art, where he earned his Master’s Degree in Music Theory.

He has since lectured widely on music and its application to prayer and served as a guest lecturer at the Yale Conservatory of Music in the USA. Affectionately known as “Cantor Benny,” he also gives classes and maintains a rigorous regime of study and practice of traditional and modern liturgy and music. He has produced several concerts, performing worldwide in New York, London, Tel Aviv, South Africa and Warsaw. Cantor Rogosnitzky’s interests and talents are not limited to the sphere of music.

He worked closely with late international financier, Edmund Saffa, and has been instrumental in the organization of a myriad of successful charitable functions. He is also actively involved in Jewish outreach, both in the USA and Israel. He is passionately committed to making a meaningful difference in people’s lives. In 1996 he was appointed as the senior cantor of the prestigious Jewish Center on the Upper West Side, where he served for 13 years. He now serves as Cantor at Park East Synagogue.