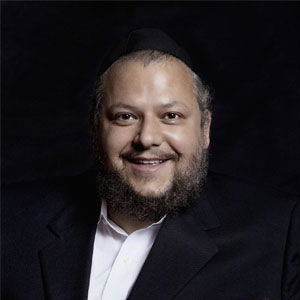 Admired for his incredible range, Chief Cantor Yitzchak Meir Helfgot is beloved and revered as one of the greatest and most important cantorial voices of the 21st century. He enthralls audiences all over the world with his passion and unbounded joy in bringing sacred Jewish music and opera classics to life.

Cantor Helgot was born in Tel Aviv, Israel. From the tender age of five, after hearing Moshe Koussevitzky’s recording of “Akavia Ben Mahalalel,” Yitzchak Meir knew what his life’s calling would be. At just eight years old, Cantor Helfgot recorded his first works, and then spent much of his childhood and teenage years studying voice and nussach (the art of prayer).

Holding his first concert for the first time at the age of 23, Helfgot immediately took the world of cantorial song by storm with his powerful renditions of three renowned classics– Zibert’s “Mimkomcha,” Kwartin’s “Tiher Rabbi Yishmael” and Rosenblatt’s “Ad Hena.” His magnificent and soulful voice has reigned supreme and captivated the international stage ever since.

Cantor Helfgot appears regularly in concerts, as well as serving as guest cantor for communities around the globe–from New York to Beijing, from South Africa to Italy, From Russia to Australia. He leaves audiences spellbound with his masterful renditions of classics by Rosenlatt, Koussevitzky, Kwartin, Sirota, and Hershman, transporting audiences back to the Golden Era of Chazzanut.

Cantor Helfgot has collaborated with some of the greatest cantors and musicians of our time, including Cantor Chaim Adler, Jimmy Barnes, comedian Elon Gold, Julie Andrews, and Itzhak Perlman.

In addition, Cantor Helfgot recently performed in front of a live audience of 92,000 people at the 12th Siyum Hashas at MetLife Stadium. His performance was broadcast world-wide along with the rest of the siyum.In December 2006, under the auspices of Cantors World, he preformed a solo concert at the Metropolitan Opera House with the New York Philharmonic directed by Maestro Mordechai Sobol. In January 2007, he sang in Madison Square Garden to an audience of 30,000 at Siyum HaShas. In December 2007, he performed at Lincoln Center in Avery Fisher Hall, accompanied by the New York Philharmonic, in a tribute to Cantor Moshe Koussevitzky. He shared a stage with Cantor Shimon Farkas of Central Synagogue in Sydney, Australia, Cantor Yehuda Niassof, and rockstar Jimmy Barnes in August 2009. In December 2010, he performed at the White House during a Chanukah menorah lighting ceremony. He has also performed in distinguished venues, synagogues and concert halls in almost every European city and the world over, including the Warsaw Opera House in Poland, Henry Crown Hall in Jerusalem and Carnegie Hall in New York City.

The public is excited over unprecedented collaboration with Itzhak Perlman, the world-renowned violin virtuoso, in an album entitled Eternal Echoes released by SONY in the fall of 2012. This project blends the masterful zeal of Perlman’s violin with Helfgot’s powerful voice while they perform their personal Israeli, classical and cantorial favorites that pay tribute to musical tradition and history.

Truly living up to his name, Helfgot (literally translated as someone who helps G-d) rouses all who hear his golden voice to new spiritual heights. Cantor Yitzchak Meir Helfgot currently serves as Cheif Cantor of the Park East Synagogue in New York City, where congregants delight in rapturous Shabbat and High Holy Day services projected by Helfgot’s voice of diving magnificence.