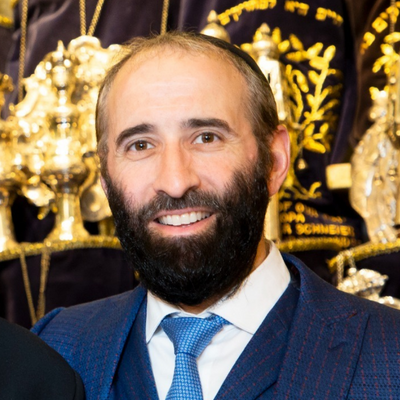 Cantor Laivi Freundlich was born in England, and studied in Canada, South Africa and the USA where he obtained his Rabbinical Ordination.

At the young age of 13 he was appointed Cantor of the Rectory Square Synagogue in London’s famous East End. Laivi began his formal Cantorial training while studying in Canada under the direction of the late Cantor David Bagley, where he continued to lead the services at the Young Israel of Val Royal in Montreal.

At age 20 his talent was duly recognized by the retiring Rev. Stephen Robbins, who invited him back to London to lead the services at the world famous Edgware United Synagogue, then the largest Synagogue in Europe. After graduating from the National School of Arts in South Africa. Laivi went on to assume the position as Chief Cantor of the Northern Suburbs Hebrew Congregation, where he stayed for 5 years.

In 2001, Laivi moved with his wife Dina to the USA and was quickly hired as an associate Cantor by Rabbi Arthur Schneier of the Park East Synagogue, where he continues to inspire the congregation.

Laivi comes from a large family of 12, and is the grandson of Holocaust survivors who were deeply involved in the Kindertransport Rescue Movement in 1938-1940. This self sacrifice by his grandparents has inspired the entire Freundlich family to become actively involved in the continued Jewish education of children the world over. From London to Beijing, Paris to New York, Laivi and his six brothers are passionately leading entire communities, where they are at the forefront of successful Jewish outreach programs.