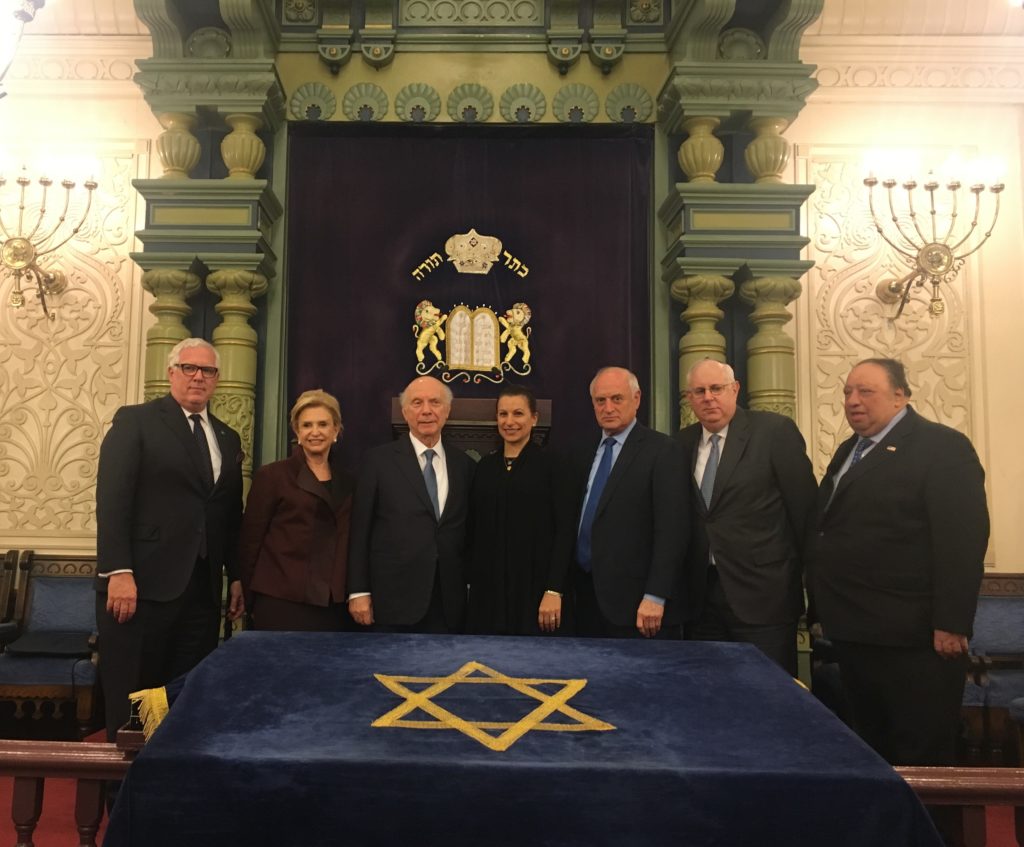 Following a string of bomb threats directed at Jewish Community Centers and other anti-Semitic incidents across the United States, Rabbi Arthur Schneier, Senior Rabbi of Park East Synagogue and President and founder of the Appeal of Conscience Foundation hosted Governor Andrew Cuomo and U.S. Representative Carolyn Maloney in separate meetings at the synagogue.

“As a holocaust survivor I am pained and saddened that not only in Europe but even in our land of freedom we are facing widespread anti-Semitic acts,” said Rabbi Arthur Schneier. “Synagogues, schools, and community centers represent the jugular vein of our community, are the front line targets of hatred.”

Congresswoman Maloney speaking at a press conference in the Synagogue’s sanctuary called on the Department of Justice to create an anti-Semitism task force, announced a new bill for Holocaust education and asked for the Department of Education to adopt a standard definition for anti-Semitism and issue guidance to keep students safe. “Combating anti-Semitism and any kind of hate-driven crime must be a multi-pronged effort. While we rely on law enforcement to keep us safe and bring the perpetrators to justice, we must also engage in community education efforts to stop the hatred before it starts or escalates,” said Maloney.

Rabbi Arthur Schneier thanked the community leaders and the Congresswoman for speaking out against the incidence of hate. “This is no time to be silent; I commend my friend Congresswoman Carolyn Maloney for her concern for her constituency and beyond, and the concrete measures that she has taken to protect the Jewish community and all Americans”

Governor Cuomo who visited Park East Synagogue a few hours before departing for a solidarity trip to Israel stated, “There has been a wave of anti-Semitism, and it has been very disturbing to members of the Jewish community. That anxiety, needs to be addressed with substantial, intercontinental gestures. The relationship between the Jewish community and the people of the state of New York is built on mutual support and respect. It is built on love, and that will not change.”

Rabbi Arthur Schneier said the Jewish community was most appreciative of the Governor’s strong words and for making the trip to Israel. “We have faith in the American people, we have faith in America, and we know that we can count on federal state and local government leaders to safeguard, protect, and ensure the security of all Americans. On behalf of Appeal of Conscience Foundation and the leaders of major religious faiths we stand united to help educate and inspire our people for mutual respect and peaceful coexistence.”