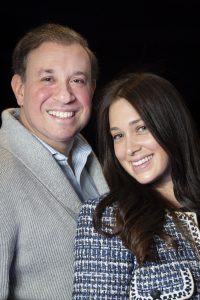 Eric and Morgan Mendel are deeply involved in Park East Synagogue’s religious, educational and cultural programs. The Synagogue has played a key role in many of their milestones as a couple, as they were married by Rabbi Arthur Schneier in 2013. The Mendels are blessed with two young children; their son, Landon, is four and their daughter, Serene, is two.

Morgan served as a Kindergarten teacher at Park East from 2016 to 2019. She earned her Bachelors’ and Master’s Degrees in Special Education from New York University.

Eric, who serves as the Synagogue’s Assistant Treasurer, has worked as an innovator in the long-term healthcare space for more than two decades. He is CEO of Avenir Healthcare Group, which provides management, consulting and administrative services to long-term care facilities. Eric was appointed by the Mayor to serve on the Age Friendly NYC Commission and serves on several Boards, including the Empire State Association of Assisted Living, the Maimonides Medical Center Cardiac Advisory Board and the Board of Directors of the historic Mount Carmel Cemetery. He holds a Bachelor’s degree in Economics from Boston University and a Masters Degree in Health Systems Administration from Rochester Institute of Technology.

We look forward to honoring them at our 132nd Anniversary Dinner Dance on June 8!