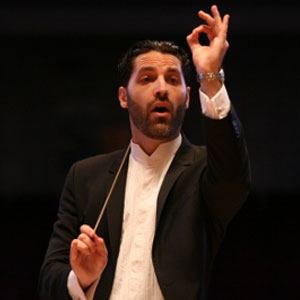 Russell Ger is a young Australian conductor based in New York. He has conducted a broad spectrum of orchestral, operatic, and choral music, both in North America and his home country of Australia.

in 2013, Mr. Ger was selected as one of four Finalists from around the world for the prestigious 2nd International Chicago Symphony Orchestra Sir Georg Solti Conducting Apprenticeship. He is also shortlisted as a candidate for the position of Music Director with the Lake Forest Symphony, a professional orchestra in North Chicago.

At the express invitation of Cantor Yitzchak Helfgot, Mr. Ger moved to New York City from Boston in 2011 to take up the position of Music Director and Conductor for Park East Synagogue. It was his relationship with Cantor Helfgot that led to Russell’s involvement in the recording project for Sony with Itzhak Perlman. The promotional tour saw performances before full houses at Boston’s Symphony Hall, Toronto’s Roy Thomson Hall, Long Island’s Tilles Performing Arts Center, an audience of 6,000 at the Barclays Center arena in Brooklyn, and 15,000 at the Hollywood Bowl.