Rabbi Arthur Schneier, Senior Rabbi of Park East Synagogue and the founder and president of the Appeal of Conscience Foundation, who hosted Pope Emeritus Benedict XVI during his first ever visit to a synagogue in the United States lauded the former leader of the Catholic Church for his efforts to build meaningful relationships with the Jewish community and to build ecumenical bridges between faith communities.

“I was privileged to welcome Pope Emeritus Benedict XVI at Park East Synagogue, the first papal visit to a Synagogue in the United States on April 19, 2008. Symbolic of his outreach to the Jewish community. He applied his wisdom, intellect and heart, in pursuit of peace and inter-religious cooperation. I offer my condolences to His Holiness Pope Francis and the worldwide Catholic community on the death of Pope Emeritus Benedict XVI.”

Rabbi Arthur Schneier has had a longstanding relationship with the Vatican as president of the interfaith Appeal of Conscience Foundation on behalf of religious freedom in the Soviet Union and communist Eastern Europe that dates back to Pope Paul VI and Pope John Paul II, this relationship continued with Pope Benedict. 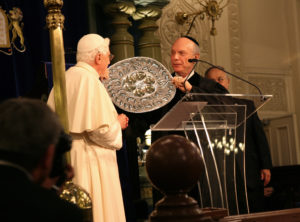 Rabbi Arthur Schneier stated, “Pope Benedict and I lived through World War II. I was a holocaust survivor he was drafted into the German army. Both of us experiencing man’s inhumanity to man. We were blessed with the privilege of working together in pursuit of peace, religious freedom and human rights while battling anti-antisemitism, xenophobia and all forms of hatred that continue to divide humanity.”

Rabbi Arthur Schneier and Pope Benedict met on numerous occasions in Rome, Jerusalem, and Naples. As well as the Inter-Religious prayer for peace gathering in Assisi, commemorating 25 years since the first inter-religious gathering convened by Pope John Paul II, promoting peace among the world’s religions. Rabbi Arthur Schneier also visited Pope Benedict at the The Mater Ecclesiae Monastery in the Vatican during his retirement.

“Pope Emeritus Benedict XVI will be remembered for his humility and commitment to promoting peace and understanding among all people and all religions. May Pope Benedict rest in peace, and may his memory is a blessing,” said Rabbi Arthur Schneier.

From: Park East Synagogue and Appeal of Conscience Foundation