Commemorating the 77th anniversary of the liberation of Auschwitz, the United Nations International Holocaust Remembrance Service at Park East Synagogue on January 25, 2022 included remarks by His Excellency United Nations Secretary-General António Guterres and Rabbi Arthur Schneier, a Holocaust survivor. The service received in-depth coverage from UN News and the Associated Press, where it was syndicated globally. 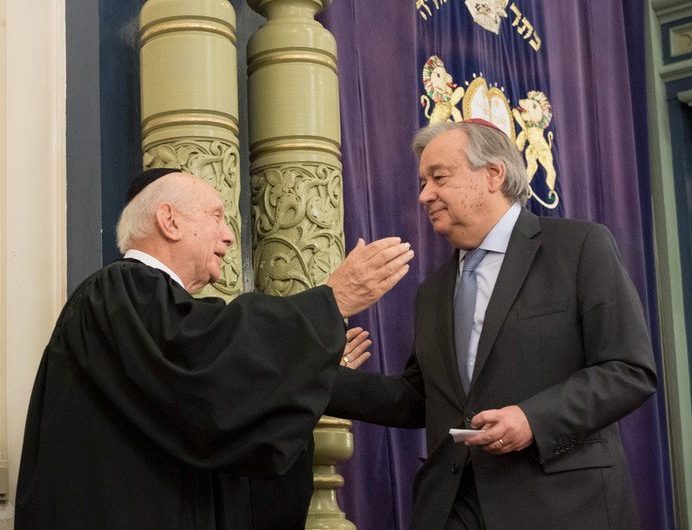 “Having survived, I pledged I would devote my life to help eradicate antisemitism and any form of hatred to make sure that no other people would have to suffer the atrocities perpetrated on the Jewish people,” said Rabbi Schneier, Senior Rabbi at Park East Synagogue, who also serves as Founder and President of the Appeal of Conscience Foundation, an interfaith coalition of business and religious leaders that promotes peace, inter-religious cooperation and ethnic conflict resolution, which co-sponsored the program.

The Diplomatic Corps and Holocaust survivors’ families participated in the program, along with the eighth grade students of the Rabbi Arthur Schneier Park East Day School, who each shared the name, age and photograph of a child killed in the Holocaust.

I was honoured to mark the anniversary of the Liberation of Auschwitz with Holocaust survivors & members of the @PESynagogue.

Liberation ended the Holocaust, but it was just the beginning of our work to ensure such crimes never happen again. pic.twitter.com/VH9uyS3wMN

Both Schneier and Guterres emphasized the importance of education in combating the resurgence of antisemitism and all forms of hateful rhetoric. “Let us stand firm against hate and bigotry anywhere and everywhere,” said Guterres. “Let us do the work of ‘tikkun olam’ – to do what we can to repair our world.”

In his closing remarks, Rabbi Schneier said, “In a world of turmoil, conflict, and confusion, may each one of us make a commitment on this 77th anniversary of the liberation of Auschwitz, a solid commitment that we will follow the mission statement of Patriarch Abraham, spiritual anchor for Jews, Christians, Muslims ‘to be a blessing’. May each one of us be a blessing to family, to country and to a hopefully united humanity.”