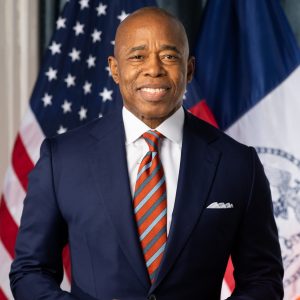 The Park East Synagogue community welcomed Mayor Eric Adams to Shabbat services on May 14, 2022. Mayor Adams was greeted by the children at Toby Einsidler’s Children’s service, who sang Shabbat songs for him. After mingling with young families, Mayor Adams met briefly with Senior Rabbi Arthur Schneier before his address to the congregation in the main sanctuary.

In his introductory remarks, Rabbi Schneier highlighted that the Mayor’s visit continues a long tradition of Mayoral visits to Park East, as every New York City Mayor since 1962 has addressed the congregation. Rabbi Schneier shared his memories of seeing the Statue of Liberty upon his arrival in New York City as an immigrant and Holocaust survivor in 1948, emphasizing the city’s history as a golden door for immigrants and a vibrant and diverse community. Rabbi Schneier commended the Mayor’s efforts to unite a city strained by division, polarization, the pandemic, and economic challenges.

Following a standing ovation from Synagogue members, the Mayor stated, “You do not stand for me. I stand for you.” Sharing his perspective as a father, the Mayor acknowledged the Jewish community’s concerns about rising antisemitism and violence in the city. He stated his administration’s commitment to protect New York City’s Jewish community and stressed the importance of Jewish New Yorkers feeling safe and secure in their city. The Mayor highlighted his commitment to supporting New York City’s police officers in their mission to protect all New Yorkers.

The Mayor detailed several of the city’s initiatives aligned with the goal of proactively preventing crime through investments in education, pointing to the Rabbi Arthur Schneier Park East Day School’s tradition of academic excellence, illustrated by RASPEDS sixth grade student Masua Chaiken’s recent first-place win in the New York State Mathematics League Competition. He detailed how the city is investing in screening children for dyslexia, providing mentorship and support for young people in their transition from foster care to young adulthood, and addressing homelessness and connecting unsheltered New Yorkers with support services.

The Mayor closed with a message of hope and optimism that together, we will move New York City in the right direction. “We’re going to tear down the walls of hate,” he said.