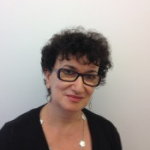 Galina Spektor grew up in Ukraine. She obtained her Bachelor’s and Master’s degrees in mathematics and has been an acclaimed math teacher for the past thirty years. Mrs. Spektor first taught in Georgia and then in several Jewish Day Schools in New York. She has been teaching at Park East Day School for the past eleven years and recieved the “Educator of the Year” award at the 2011 Annual Park East Dinner Dance. Mrs. Spektor’s students have scored in the top 1% of the country and placed first and second in the New York State Math League. She was the recipient of the 2001 American Mathematics Competition Edyth May Sliffe Award for Excellence in Teaching. Mrs. Spektor’s distinct educational prestige and experience as well as her strong Russian Jewish pride will guide Sunday Shkola’s exciting development and promising future.