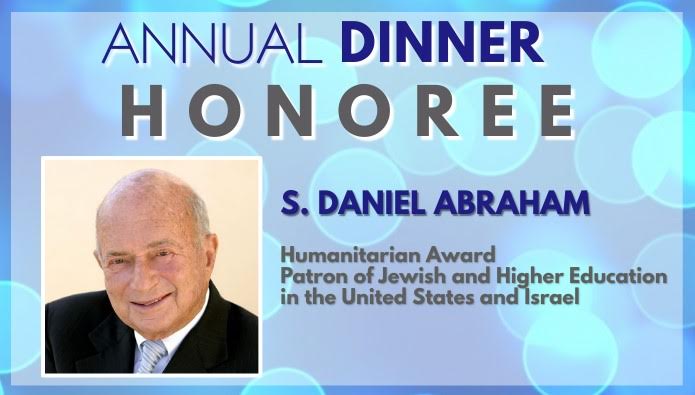 Daniel Abraham is a leading American entrepreneur and pioneer in both the pharmaceutical and diet food business. Mr. Abraham is a generous and thoughtful philanthropist dedicated to a variety of causes, among them improving health care and nutrition, encouraging Middle East peace, and broadening educational opportunities. His gift to the Mayo Clinic served to create the highly innovative Dan Abraham Healthy Living Center, whose opening in 2007 received national media coverage. A passionate advocate and supporter of higher education, Abraham has endowed an S. Daniel Abraham Chair in Middle East Policy Studies at Princeton University, and a Chair in Nutritional Medicine at Harvard University Medical School. He has also funded the Dan Abraham School for Business Administration and Economics at Bar-Ilan University in Israel, the S. Daniel Abraham Israel Program at Yeshiva University, and the S. Daniel Abraham Honors Program at Stern College for Women.

Mr. Abraham has strong ties to Israel, which he expresses through deep personal involvement and commitment. In 1989, Mr. Abraham and the late Utah Congressman Wayne Owens established the S. Daniel Abraham Center for Middle East Peace, which works to promote a just and comprehensive resolution to the Arab-Israeli conflict.

In the course of Mr. Abraham’s travels, he became convinced that Israel’s greatest security would come from peace with its neighbors, and this spurred his efforts to support the peace process. He is a close friend of many top leaders in the United States, Israel, and throughout the Middle East, and through those personal channels has worked tirelessly over the past two decades to help bring an end to the Arab-Israeli conflict.

Mr. Abraham and his wife Ewa reside in Palm Beach with their two children. He is a proud father, grandfather and great-grandfather. He holds honorary doctorates from Ben-Gurion University, Bar-Ilan University and Yeshiva University.

Click here to return to the 2021 Annual Dinner page.